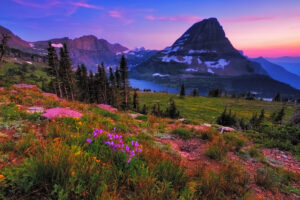 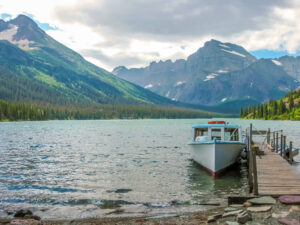 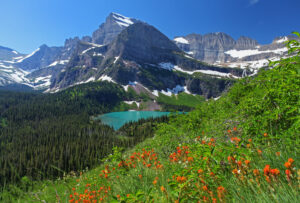 Glacier National Park is a  scenic wilderness area in the northern Rocky Mountains in northwest Montana, U.S., adjoining the Canadian border and Canada’s Waterton Lakes National Park. The two parks together comprise Waterton-Glacier International Peace Park, dedicated in 1932. Glacier National Park straddles the Continental Divide, the great ridge of the Rocky Mountains marking the boundary between westward (to the Pacific Ocean) and eastward (to Hudson Bay and the Mississippi River) drainage systems.

Glacier National Park,  encompasses 1,583 square miles, a third of which is above the timberline. It is bordered to the west and southwest by the Flathead River and Flathead National Forest, to the southeast by Lewis and Clark National Forest, and to the east by the Blackfeet Indian Reservation. Salish and later Blackfoot Indians once inhabited the area now contained within the park. The Great Northern Railway (whose rail line ran along the southern border of the park) built numerous hotels and small lodges (called chalets) throughout the park, most of which were accessible only by hiking or horseback; only a handful of them are still in use.

Mountains, lakes, and valleys show the effects of the some 50 glaciers that continue to sculpt the region. Waterfalls drop from hanging valleys, and the Garden Wall provides a stunning example of an arête (a narrow ridge left by glacial erosion on both sides). Cirques (amphitheatre-shaped basins with steep walls) are also common features. At 10,466 feet (3,190 meters), Mount Cleveland is the highest point in the park.

The steep western slopes are covered in dense forests of lodgepole pines, spruces, firs, hemlocks, and cedars, and alpine meadows feature flowering heathers, bear grasses, and glacier lilies. Prairie grasslands spread eastward across the drier plains. Mountain goats and bighorn sheep inhabit the highest elevations; black and grizzly bears roam the woods, as do deer, moose, and elk.  Bald eagles are notable among the more than 250 species of birds that live in or pass through the park. Trout, turtles and an occasional salmon can be found in the numerous lakes and streams.

Popular activities include camping, cross-country skiing, and hiking and backpacking on the park’s 700 miles (1,130 km) of trails. The 50-mile (80-km) Going-to-the-Sun Road crosses the park, allowing scenic views of mountains, meadows, and lakes; the high-country part of the road is open only in summer (mid-June to mid-September). Of the three visitors’ centers, two are open only in summer.